At the end of this self-learning lab, you should be able to:

One of the reason why we are using MCU like ATMega328p on Arduino or STM32 on our PCB to control electronic components is that typical computer doesn't provide GPIO for us to interface with other components, so it is important to learn how to manipulate IO pin on MCU.

Upload the following program and see how to Arduino toggles its pin.

We can send data to the Arduino via USB Serial using serial monitor in the VSCode. Let's try it!

Upload the following code to the Arduino:

With the Arduino is plugged into the computer, open serial monitor in VSCode.

If needed, visit https://docs.platformio.org/en/latest/projectconf/section_env_monitor.html to see how to change settings of serial monitor by editing platformio.ini

Try to send the message abc. You should see some text show up. That is the message sent by the Arduino!

You may notice that the TX and RX LED light up on the Arduino when you click "send". This is because TX and RX indicate serial communication.

The comments should be self-explanatory. Some further elaboration is given below:

The meaning of I received 97 in the serial monitor is that 97 is the decimal form of the character a in ASCII. In ASCII, every character is assigned a number from 0 to 127.

We can get the input state by reading the voltage level of a pin. Some examples include light gate, limit switch, button. Google by yourself what these sensors look like!

Now, let's try to display the status of a push button in the serial monitor.

A breadboard is a simple device designed to let you create circuits without the need for soldering. They come in various sizes, and the design can vary, but as a general rule they look something like this:

We can plug in wires and components into the holes of the breadboard easily. Once inserted that component will be electrically connected to anything else placed in that row. This is because the metal rows are conductive and allow current to flow from any point in that strip.

To implement this, you need a breadboard, a button, a resistor and several male-to-male Dupont wires prepared. Connect the components as bellows.

What is the purpose of the resistor?

When the input pin is neither pulled up or pulled down via a resistor, its reading is floating and we cannot determine its state, so always pull up / pull down the input pin before using it.

As mentioned before, apart from digitalWrite(pin, value) which controls the voltage output of the pin, we have digitalRead(pin) which reads the value from a specified digital pin. It will return either HIGH or LOW value, corresponding to 1 and 0.

The syntax digitalRead(pin) only takes 1 parameter, which is the digital pin you want to read.

Before you execute digitalRead(pin), you need to set the pin to INPUT mode first.

Upload the following code. The button reading will be displayed in the Serial monitor.

We can also use the internal pull up resistor instead 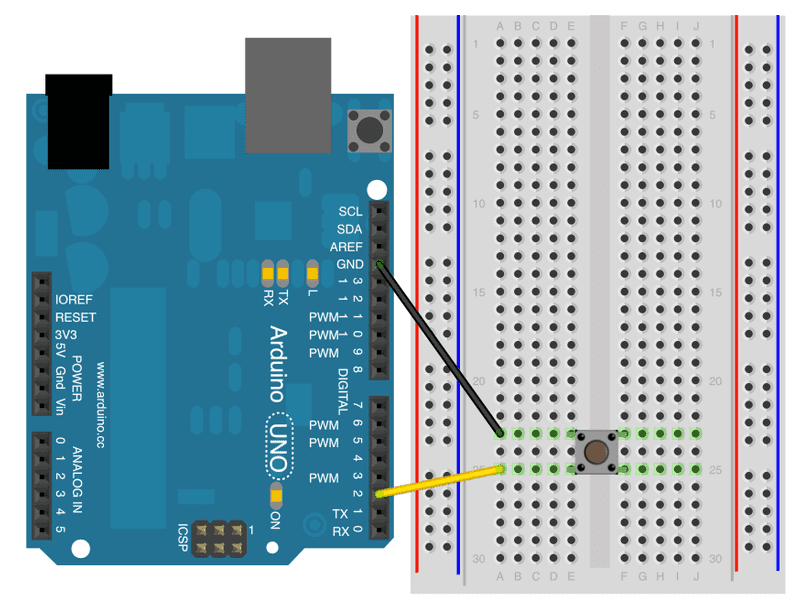 Send a signal by button

Please approach our team members after you have completed the task. In your training repository, save the code into a new file named cw-1-2-1.cpp. Commit and push the code. If you don't know how to use git/github, you can refer to the internal git tutorial here.

The more you know

You can program the button such that a function is triggered based on the input value of the pin (e.g. trigger when the pin goes from low to high) via interrupt. It can be quite useful. See https://www.arduino.cc/reference/en/language/functions/external-interrupts/attachinterrupt/ for more information.

You may notice that in the previous sections, the brightness of the LED on the Arduino is fixed. This is because the voltage provided by digitalWrite can only be HIGH or LOW, and we cannot set a "medium" brightness with it. To achieve "medium" brightness, we need to use PWM.

PWM is the abbreviation of Pulse Width Modulation.

There are 2 major functions:

In Arduino, PWM waves are generated with timers. The output pin is set to HIGH only when the conuter of the timer is lower then a preset value.

To use PWM control in Arduino, we need to use analogWrite(). Here we will use a LED to demostrate. Select one of the PWM pins. Connect the circuit as below (approach our team members if you don't understand this diagram!):

Change the value of PWM_PIN to the pin you've connected the LED, and try to change to value of duty_cycle you should see the brightness of the LED changes.

Write a program such that the brightness of the LED is changed (using analogWrite()) based on the serial input that is received.

Please approach our team members after you have completed the task. In your training repository, save the code into a new file named cw-1-2-2.cpp. Commit and push the code. If you don't know how to use git/github, you can refer to the internal git tutorial here.